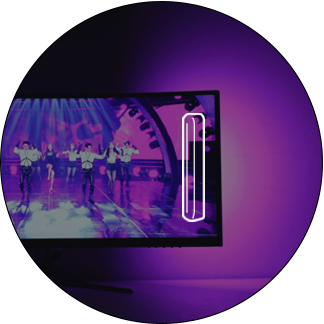 Byeongjin Kim published an article entitled, “Preference for the Background Lighting of a Display Influenced by Media and Image Features [배경 조명을 이용한 미디어 확장과 선호도 평가]” in the Archives of Design Research (AODR). In the article, a visual assessment was conducted on display expansion technology, and the Philips Hue Play Light Bar was used as a light source. An online survey revealed that four kinds of image characteristics of the image, such as brightness, saturation, complexity, and depth affect the preference.

Background Light devices demonstrate the potential effect of media-sync light behind the display, allowing users to extend the media-watching experience. Investigations are necessary to examine the relationship between media properties and users’ preferences.

Methods We conducted an online survey to explore user experiences on display background lightings (N=64). We considered ten genres of media and selected four alternative images for each genre. Participants were exposed to 40 pairs of media consisting of without or with background lighting that surrounded the display frame. The Hue Play Bar from Philips was employed, and the lighting was generated by synchronizing the light bar with the monitor. Based on the assessment scores and text answers, we identified the relationship between image features and background lighting preference.

Conclusions We investigated users’ preference for adding light to the display periphery and carried out the image-based survey. Across 10 genres, we identified the image factors and their characteristics that influence the preference for the background lighting. Finally, based on the empirical findings, we discussed the potentials and applications of background lighting to enhance the media viewing experience.

A link to the full-text