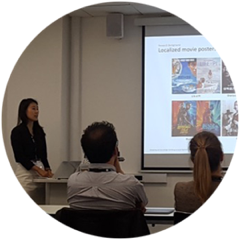 Juhee Kim presented her recent study, entitled as “Layout Preference for Korean Movie Posters: Contextual Background or Character Dominance”, at IASDR2019, Manchester, UK. The study empirically examined the impact of movie poster attributes when the audience chooses a movie. The result shows that the preference of young generation is aligned with designers’ graphic tastes. The article was initially drafted as a term paper of Research Methodology course led by Prof. Suk.

This study uses three surveys to investigate whether movie posters are required to be redesigned when importing and releasing foreign movies for a Korean audience or vice versa. Survey I included the four major attributes of poster design: character, background, title text, and colour contrast. This was carried out with Koreans (N = 30) and Americans (N = 30). Using conjoint analysis, both groups considered background to be the most important attribute, as they both perceived the background as needing to contain contextual information about the movie. In Survey II (N = 32), which was performed with existing posters, the Korean participants showed a preference for background-rich layouts, thereby confirming the results of Survey I. Different from Survey I and II, in which the majority of participants were in design-related domains, Survey III was included participants of much wider age groups and various occupations (N = 133). The younger participants in Survey III have the same tendency as the design-conscious groups from the two previous surveys. On the contrary, the older participants in Survey III were indifferent to the poster’s layout; instead, the older participants showed slightly positive responses to character dominance. Given that the preferences of the two different age groups do not merge, Survey III concluded that the targeted age range of the audience is an important factor that should be considered while approaching various movie poster layout styles. In future studies, more variables are expected to be explored to provide empirical evidence for design practitioners to create design outcomes more efficiently.