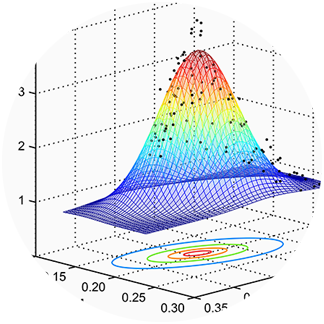 Kyungah Choi, a Ph.D. candidate at Color Lab recently published an article entitled “Assessment of white for displays under dark- and chromatic-adapted conditions” in the journal Optics Express, a top-ranked journal in the optics field. This study aims to derive an empirical model to predict the degree of whiteness as a function of position in color space via a series of dark-adapted and chromatic-adapted psychophysical experiments. This paper builds on and extends previous studies by observing the white perception of a self-luminous display presented in a real rather than a simulated environment, lit by illuminants with various chromaticities.

This study aims to investigate the white perception of mobile display devices under dark-adapted and chromatic-adapted conditions. The white perception was modeled with error ellipses and bivariate Gaussian distributions. The dark-adapted white encompassed a rather large area centered around 7300 K, slightly above the Planckian locus. The chromatic-adapted whites were highly dependent on the ambient illuminant, and were not parallel to the Planckian locus. Combined, the white region encompassing 6179 to 7479 K in correlated color temperature and −0.0038 to 0.0144 in Duv was suggested. The results of this study are expected to be the basis for enhanced white appearance on mobile display devices.