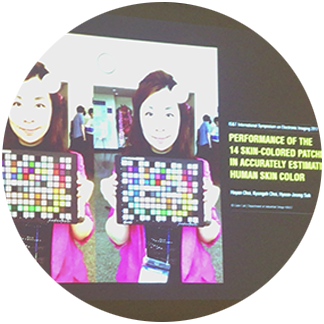 This research examined the performance of skin colored-patches for accurately estimating human skin color. More than 300 facial images of Korean females were taken with a digital single-lens reflex camera (Canon 550D) while each was holding the X-Rite Digital ColorChecker® semi-gloss target. The color checker consisted of 140 color patches, including the 14 skin-colored ones. As the ground truth, the CIE 1976 L*a*b* values of seven spots in each face were measured with a spectrophotometer. For an examination, three sets of calibration targets were compared, and each set consisted of the whole 140 patches, 24 standard color patches and 14 skin-colored patches. Consequently, three sets of estimated skin colors were obtained, and the errors from the ground truth were calculated through the square root of the sum of squared differences (∆E). The results show that the error of color correction using the 14 skin-colored patches was significantly smaller (average ∆E = 8.58, SD = 3.89) than errors of correction using the other two sets of color patches. The study provides evidence that the skin-colored patches support more accurate estimations of skin colors. It is expected that the skin-colored patches will perform as a new standard calibration target for skin-related image calibration.