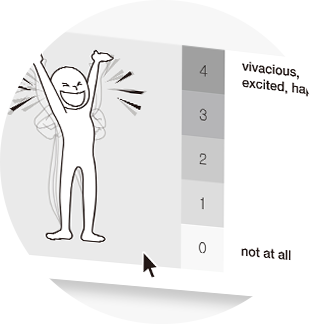 This study investigated how video playback styles affect viewers’ emotional responses to a video and then suggested emotion assessment tool for playback-edited videos. The study involved two in-lab experiments. In the first experiment, observers were asked to express their feelings while watching videos in both original playback and articulated playback simultaneously. By controlling the speed, direction, and continuity, total of twelve playback styles were created. Each of the twelve playback styles were applied to five kinds of original videos that contains happy, anger, sad, relaxed, and neutral emotion. Thirty college students participated and more than 3,800 words were collected. The collected words were comprised of 899 kinds of emotion terms, and these emotion terms were classified into 52 emotion categories. The second experiment was conducted to develop proper emotion assessment tool for playback-edited video. Total of 38 emotion terms, which were extracted from 899 emotion terms, were employed from the first experiment and used as a scales (given in Korean and scored on a 5-point Likert scale) to assess the affective quality of pre-made video materials. The total of eleven pre-made commercial videos which applied different playback styles were collected. The videos were transformed to initial (un-edited) condition, and participants were evaluated pre-made videos by comparing initial condition videos simultaneously. Thirty college students evaluated playback-edited video in the second study. Based on the judgements, four factors were extracted through the factor analysis, and they were labelled “Happy”, “Sad”, “Reflective” and “Weird (funny and at the same time weird).” Differently from conventional emotion framework, the positivity and negativity of the valence dimension were independently treated, while the arousal aspect was marginally recognized. With four factors from the second experiment, finally emotion assessment tool for playback-edited video was proposed. The practical value and application of emotion assessment tool were also discussed.

Full text in Journal of Korea Society for Emotion and Sensibility