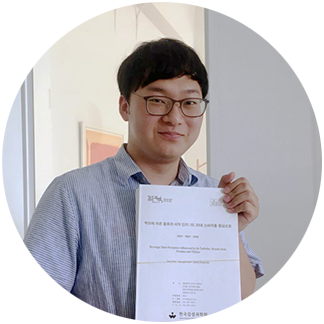 Taesu Kim and Kyungah Choi published an article entitled, “Beverage Taste Perception Influenced by Its Turbidity: Results from Twenties and Thirties [탁도에 따른 음료의 미각 인지: 20, 30대 소비자를 중심으로]” in the Korean Journal of the Science of Emotion & Sensibility. The study investigated the cross-modal correspondence between the turbidity and taste of beverages and thereby suggested the potential of turbidity as a new visual parameter to communicate the taste experience of beverages. Taesu has been an undergraduate intern of Color Lab for the last three months.

This research investigated the cross-modal correspondence between the turbidity and taste of beverages. For an empirical study, we employed two types of achromatic beverages: rice wine and a soft drink. The turbidity of each drink varied between 0.0625~32 g/L, and 0.0078~4 g/L, respectively, and the stimuli were prepared in ten levels according to cognitive turbidity. In the study, participants (N=35) rated each drink stimulus using a 3-point Likert scale with regard to five basic tastes: sweet, salty, bitter, sour, and preferred. In addition, six specific tastes were included that deliberately describe rice wine and the soft drink. Three were yeasty, alcoholic, and astringent for the rice wine, and the other three were creamy, bubbly, and syrupy for the soft drink. Based on participants’
assessments, the turbidity of rice wine is highly positively correlated with all five basic tastes. In contrast, the turbidity of the soft drink was positively correlated with sour only. Concerning preference, the most preferred turbidity of rice wine was 4.6~20 g/L, which is close to the turbidity of existing products on the market. Furthermore, except for astringent and syrupy, all tastes were influenced by the turbidity, which implies the potential of turbidity as a new visual parameter to communicate the taste experience of beverages.
Download the full text
Previous Next