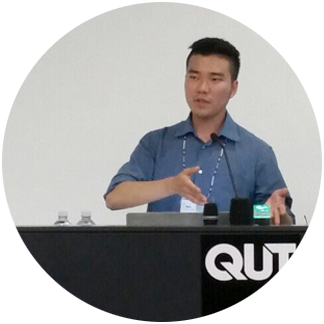 Minhwan Kim and Kyungah Choi presented their work entitled, “Yo!: Enriching Emotional Quality of Single-Button Messengers through Kinetic Typography” at the 2016 ACM Conference on Designing Interactive Systems (DIS 2016) in Brisbane, Australia. The study explored the influence of adding kinetic typography onto the single-button messenger to enrich the communicational aspects by conducting a series of two complementary studies. This research had been carried out as a term project in ID512 Research Methodology class in Fall semester instructed by prof. Suk.

This study aims to investigate the effects of kinetic typography elements in single-button messengers to enrich the conveyance of emotional quality. Two complementary studies were conducted: First, a paired user workshop was conducted through which eight macro animation types were extracted to facilitate the evaluation in a subsequent experiment. Second, an empirical study was conducted to explore the effects of kinetic typographical elements, namely animation type, speed, and dynamics, on conveying particular emotions. The study is expected to act as a good stepping stone for further developing single-button messengers as an alternative messaging tool with unique communicational aspects.

Full text in the Proceedings of DIS’16