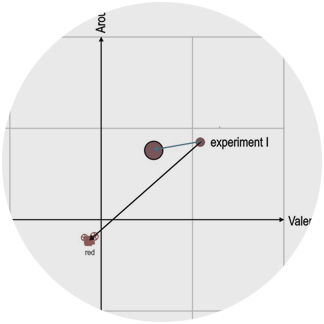 Dr. Suk published an article entitled as “Emotional Response to Simple Color Stimulus” in International Journal of Affective Engineering, previously called International Journal of Kansei Engineering. This study investigates the emotioanl response to color stimuli when color stimuli were presented as solid surface. Then the effect was compared when the colors were viewed in a sequence of various types of visual stimuli, such as picture images and movie clips. The empirical finding points out that the emotional reaction to the given color is a relative quantity. She was awarded with the best thesis award 2009 with this paper.

The affective judgments of colors in two experiments with different stimulus contexts were compared. In Experiment I, the emotional responses to 36 color stimuli were profiled in terms of valence (Cronbach’s a=0.793), arousal (a=0.880), and dominance (a=0.904) dimensions of emotion using the Self-Assessment-Manikin (SAM) scale (N=46). In Experiment II, subjects were shown not only 17 colors, but also other types of visual stimuli, such as eight pictures, nine film-clips, and nine adjectives (N=45). Between the two experiments, a Preliminary Test was conveyed in order to collect film-clips. Consequently, the emotional profiles of visual stimuli were characterized by dimensions of emotion, and the SAM ratings of the 17 identical colors from both experiments were compared. Empirical results showed that the reference field of emotional responses to colors was significantly shifted to be less arousing (p<.05, two-tailed).