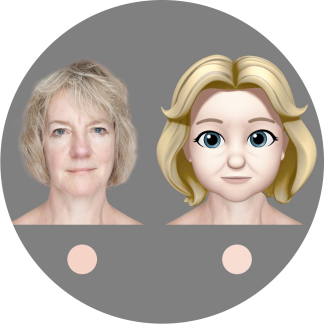 Yuchun Yan, a Ph.D. student of Color lab made an interactive and poster presentation entitled “Skin Color Perception in Portrait Image and AR-based Humanoid Emoji.” A user study was conducted with 20 graduate students majoring in design, and 24 portrait images in four skin tone categories were employed. Through the user study, we observed skin colors become lighter and paler except the dark skin tone. Two representative regions, the forehead rim and linking band between eye and lip were uncovered.

Animated emoji in augmented reality (AR) enables users to create a humanoid version of themselves that mimics their facial expressions dynamically. In this study, we aim to explore how people perceive facial skin color in the digital portrait in comparison with humanoid emoji in AR. We tried to identify the skin color representative regions and to estimate the color difference between the two contexts. We conducted a user study comprised of three tasks with 20 graduate students majoring in design and employed 24 portrait images in four skin tone categories. Through the user study, we first figured out that forehead and cheek regions, and particularly the linking band between eye and lip, were often considered as the representative region of facial skin color. Second, we observed skin colors become lighter in general, except dark tone. Furthermore, concerning the vividness, all four skin tone types became paler in humanoid emoji. Diverse ethnicities and contexts are expected in the future to provide a more robust and reliable analysis of the perception of skin color.