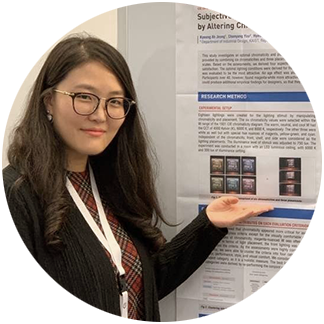 Kyeong Ah Jeong, a Ph.D. student of color lab made an interactive and poster presentation, entitled as “Subjective Judgments of Refrigerator Lighting by Altering Chromaticity and Placement across Age Groups” at CIC27, Paris, France. She investigated an optimal chromaticity and placement of refrigerator lighting to meet users’ preference. Eighteen lighting stimuli were provided by combining six chromaticity and three placement combination. A total of 177 women in several age groups participated and assessed the lighting stimuli with the ten affective scale. Through the experiment, four aspects to describe the characteristics of lighting styles could be derived as Performance, Aesthetics, Visual comfort, and Overall satisfaction. In addition, an age effect was confirmed for the optimal lighting conditions in each lighting style.

This study investigates an optimal chromaticity and placement of refrigerator lighting to meet users’ preference. In the experiment, eighteen lighting stimuli were provided by combining six chromaticities and three placements. A total of 177 women aged 20 to 69 participated and assessed the lighting stimuli using ten affective scales. Based on the assessments, we derived four aspects to describe the characteristics of lighting styles: performance, aesthetics, visual comfort, and overall satisfaction. Specifically, cool white lighting placed in front appealed the well-functioning, performance support aspect. Further, when the shelves were lit in magenta-white, the refrigerator interior was evaluated to be the most attractive. When visual comfort matters more, shelf lighting in cyan-white would be optimal. An age effect was also discovered. Younger participants in their 20s and 30s preferred cool white when lit indirectly. Participants over 40, however, found magenta-white more attractive, especially when they viewed it directly. By expanding this study to diverse product categories, it could produce additional empirical findings for designers, so that they may choose and place lighting properties more efficiently and successfully.