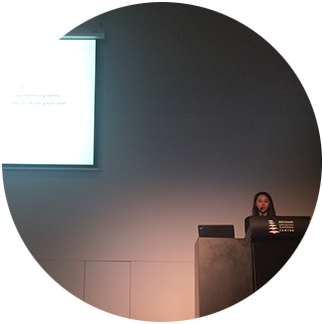 Chorong Kim, Changmin Kim and Nooree Na presented their work entitled, “Self camera shot position to make myself more in style” on the IASDR 2015 in Brisbane, Australia. The study investigated the impact of selfie shot position on various emotional impressions, and suggested the specific shot position which makes a selfie look more attractive. The paper started as a term project of Prof.Suk’s class, ID512 Research Methodology in Fall semester, 2014. Thanks to the further support by Color Lab., the paper had been finalized early 2015.

We attempted to find whether a camera position influences one’s judgment of selfies and to identify the relationship between the position and judgement in a quantitative way. For the user test, we set the camera positions by means of horizontal rotation angle (θ; 4 levels), vertical rotation angle (φ; 3 levels), and distance from subject (r; 3 levels) independently. In order to reduce the total number of camera positions while minimizing the loss of the information, we adopted an orthogonal design method that resulted in 19 necessary combinations of θ, φ, and r. Twenty-one college students participated in the test, and each took self-portrait photographs, or selfies, from the 19 different camera positions. Then participants made subjective judgments on the 19 selfies with regard to the four bipolar adjective sets, such as “Tough – Delicate”, “Lively – Calm”, “Mysterious – Familiar”, and “Brusque – Kind”. The results showed that camera angles in any directions influenced one’s judgments of the subject, where the impact of vertical angles was the greatest followed by horizontal angles. However, the distance often did not influence the judgment except for the “Lively – Calm” style. Based on the empirical findings we propose eight kinds of camera angles that enhance one’s desired style in selfies, and we discuss limitations and further applications of this study.